THE GIFT OF GRATITUDE

Kayleigh Shannon dreamed of working in prosthesis design and development, a career path she hoped would one day lead to a job at West Park’s Prosthetic and Orthotic Service. She was inspired by the work happening at our busy prosthetic lab after her family watched a segment about West Park on the Rick Mercer Report.

“We had talked about the episode,” says Dean Shannon, Kayleigh’s dad. “It had just aired the week before she passed.”
Kayleigh died suddenly in her sleep at the age of 19 from a heart condition known as Long QT syndrome. She was in her second year at the University of Guelph, where she was studying biomedical engineering.

At the funeral, in lieu of flowers, Kayleigh’s family named West Park Foundation for memorial donations. There were 600 people at the visitation, and they started to donate. And that’s how the Shannon family’s fundraising began. Since 2017, Kayleigh’s family and friends have mobilized their grief to raise over $25,000 in support of West Park. 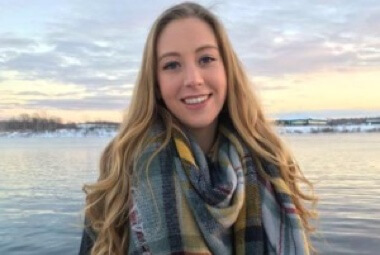 Kayleigh Shannon dreamed of working in prosthesis design and development, a career path she hoped would one day lead to a job at West Park’s Prosthetic and Orthotic Service.

“We couldn’t just let her pass and go without doing something that honoured her memory,” says Dean. “It felt like the right thing to do, the sort of thing that she would want us to do: to continue the work that she set out to do herself and didn’t get a chance to complete.”

Kayleigh’s first dream was to be an elite skier and compete at the World Championships. Then one day at a ski hill, she came across single and double amputee skiers. This moment sparked her desire to help athletes recover from life altering disabilities.

Dean and Clare Shannon organize an annual coffee house on their farm to celebrate their daughter’s life. Surrounded by family, friends, live music and good food, proceeds from the event have helped them reach their fundraising goal. A space in West Park’s new prosthetics and orthotics centre will be named after Kayleigh, and her legacy will help West Park’s patients as they strive to live fuller, more independent lives.

The newly designed centre will be more than double the size, accommodating innovative and new technologies to better serve our growing patient population, and include an enhanced gait assessment area and greater privacy for patients.
“Now that we’ve reached the goal, we want to continue to do the work on behalf of West Park,” says Dean. “Because it feels like her story is not finished yet.”