GIVING TO HONOUR AN EXTRAORDINARY LIFE

Pat Martin makes a generous contribution in the name of her late husband, Bob

They met under a lamppost on the street where they both lived. His family had just moved in. She was in Grade 11, he was in Grade 13. They connected immediately and were soon going steady. Her parents disapproved but he was persistent.

It was young love, and it lasted. Bob and Pat Martin were married for 52 years when he died in 2011. Now Pat is remembering her wonderful life partner with a gift to name the café in West Park’s new hospital.

Bob worked as a surveyor for Consumers Gas during summers in university, and then joined the company full-time when he graduated in engineering. An exceptional business leader, Bob moved quickly through the ranks, leading international projects in New Zealand, Australia, the U.K. and Brazil. In 1981, he was appointed President and CEO. “He liked everyone, and everyone, from the loading dock to the board room, liked him,” says Pat. “He was respected for his intelligence, leadership and ability to communicate.” Consumers became part of Enbridge, and Bob served on the board for many years after his retirement. 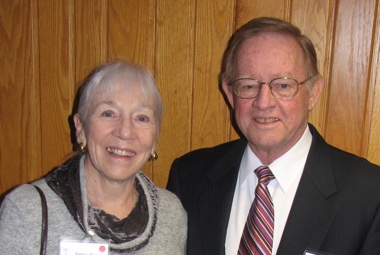 Pat is remembering her wonderful life partner with a gift to name the café in West Park’s new hospital.

Bob was very community-minded and provided leadership to many major local charities over the years. He was on the West Park Healthcare Centre board from 1984 to 1996 and was chair of the Foundation board from 1991 to 1996. Pat says he was inspired in part by a young quadriplegic he met and befriended at West Park.

Bob and Pat raised three children and have 10 grandchildren. They were in the process of moving into an condominium when he became ill and was hospitalized. Soon after his death, Pat had to undergo hip replacement surgery, and spent two weeks rehabilitating at West Park. Six months later, she had surgery on the other hip, and spent another week at the hospital. “They were very good to me,” she says.

The Robert and Patricia Martin Café will be a central meeting place for patients, family members, staff and physicians – a warm, comfortable and light-filled space. It will open onto an outdoor patio, and the interior design will use stone and wood to help bring the outside in. Pat says she’s sure her husband would approve of her gift: “Bob really believed in West Park and the wonderful contribution they make to help patients get their lives back.”