GRATEFUL FOR OUR CARE, A FAMILY GIVES BACK

Life can change in a moment.

Devinder Basra left her home in Etobicoke one morning to go to temple. As she walked along the sidewalk, a car careened off the road and struck her. She became stuck under the car but managed to give her home phone number to a bystander. He called her son, Vicky.

When Vicky arrived at the scene, she was still under the car. A tow truck had to lift the car up to free her. An ambulance rushed her to the trauma centre at Sunnybrook Hospital. Vicky remembers his mother saying to him, “I don’t know what’s happening, I didn’t do anything wrong.” 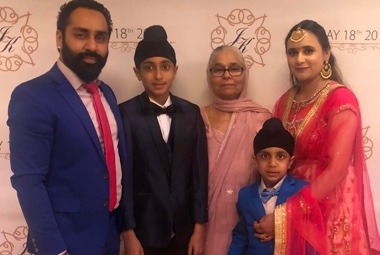 “We can’t give much, but we give as much as we can afford. I would still like to do more in the future.”

She had multiple injuries and spent a week at Sunnybrook before being transferred to West Park. There she spent two months in rehab, regaining her strength and function. Vicky and his sister were often at the hospital to support her. “All the staff were very helpful,” he says. “They told us we could stay with her if we needed to, and we could call and ask anything.”

After her stay as an in-patient, Devinder returned regularly to West Park for out-patient therapy. She told her son that she was grateful for the help she was receiving and wanted to give something back. Vicky agreed. “A lot of people give to Sunnybrook, but not many give to rehab hospitals,” he notes. “We can’t give much, but we give as much as we can afford. I would still like to do more in the future.”

Vicky says West Park is a special place. “Whenever I was there with my mum, I noticed that all the patients were happy and nobody had any complaints about the care. West Park is an important part of this community.”