2018 Was a Momentous Year for West Park

2018 Was a Momentous Year for West Park

Our first major event of the year was the 2nd Annual Tournament of Stars, which took place from March 23-24. The two-day event started with a Celebrity Draft Party at a Toronto nightclub, followed by a day-long basketball tournament at University of Toronto’s Goldring Centre. The eighteen fundraising teams were joined by NBA alumni and other hoop-loving celebrities, including Jerome ‘Junk Yard Dog’ Williams, Charles Oakley, Tracy Murray, Morris Peterson and more. The event raised over $600,000 in support of West Park!

On the second day of Tournament of Stars, Toronto Mayor John Tory drew the winning ticket in West Park’s fourth annual lottery. Bob Gazey of Scarborough was the winner of a Jeep Patriot, courtesy of Peel Chrysler.

The highlight of our summer was the 5th Annual Chairs’ Invitation Golf Tournament: Seventy golfers took to the links at the beautiful Glen Abbey Golf Club on August 22, and were treated to a wonderful dinner and silent auction. The day raised just under $120,000 in support of West Park!

In September, West Park expanded its research team by hiring Dr. Crystal MacKay as Amputee Scientist. The position, which is supported by the Foundation, empowers Dr. MacKay to explore the healthcare needs of people with limb loss, developing innovative interventions, while expanding West Park’s knowledge of amputee rehabilitation. 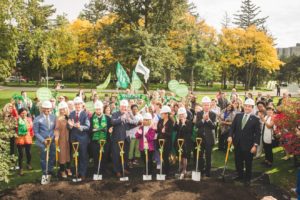 Nevertheless, the major highpoint of 2018 was the official groundbreaking for our new hospital! On October 11, more than 300 members of the West Park community celebrated the redevelopment of the hospital’s 27-acre campus.  Ontario Premier Doug Ford and Infrastructure Minister Monte McNaughton joined guests at the groundbreaking celebration.

The new state-of-the-art building is scheduled to be completed in 2023 and will face the beautiful Humber Valley, allowing patients to benefit from the healing power of nature.

During the “enabling works” stage, developer EllisDon prepared for the excavation of the grounds for the new hospital by rerouting the underground utilities to the Main, Ruddy, Gage and Long-term Care Centre buildings.

Finally, we capped off a successful year of fundraising in support of West Park with UNCORK UNTAP UNWIND! On November 1st, more than 300 people sipped, savoured and danced the night away at our signature tasting event. The night featured eight beverage vendors, including local favourites like Bellwoods Brewery and Chateau des Chârmes. Uncork raised $230,000 in gross revenue!