WORKING REMOTELY AS A PRINCIPAL DURING AMPUTEE REHAB

When Sarah Calvert first came to West Park in 2017 to recover from a below-the-knee amputation of her left leg, due to complications from diabetes, she didn’t know what to expect. She had never even heard of West Park.

“My doctors said West Park was the best place for me get proper amputation rehabilitation, which wasn’t available at my local hospital,” she says. “I was very impressed: I received the most specialized care from the doctors, nurses and therapists.” 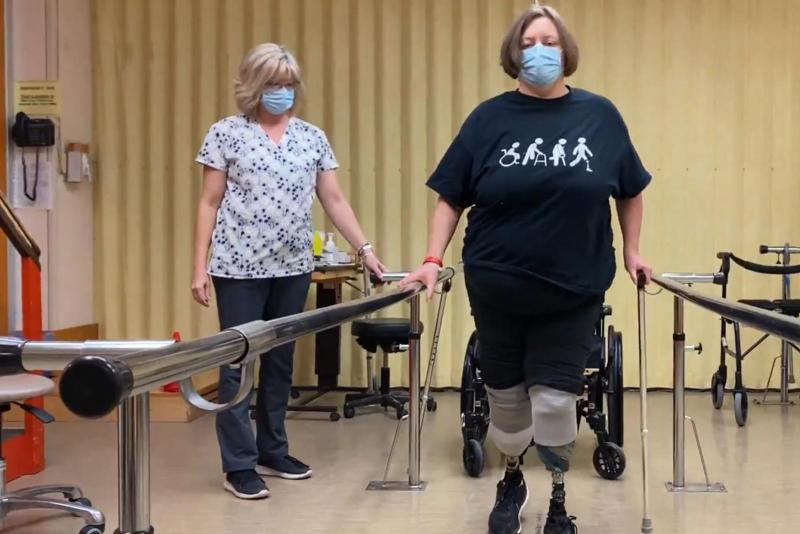 Sarah also found a community of other amputees, some of whom were living with diabetes like herself. And when the mother of two returned to West Park in 2020 after having her right leg amputated, she was ready to balance her rehabilitation with her work as an elementary school principal, managing her virtual school from her hospital room.

“Things were very different because of the pandemic. But I was very happy to be back at West Park,” she says. “It was very busy, but I’ve been a principal for nine years, so I knew all the things that needed to get done.”

Each morning, when her rehabilitation schedule for the day was posted, Sarah would let her teachers know when she would be unavailable. She worked around her rehab, which included physiotherapy exercises to help her get back up on her feet and walk again, and occupational therapy to regain skills. She then plugged in to her remote work on her downtime, and used the weekends to catch up.

“Remote work is a little different, so I was able to do it from the hospital,” Sarah says. “I had the tools to support my teachers and help make sure the kids were in class and had the right materials to learn.”

As an experienced school board equity officer, Sarah also found herself becoming more involved at West Park. She is currently a Patient Family Advisor and a member of the hospital’s new Diversity, Equity and Inclusion Committee.

“People look at me and automatically assume I can't do something,” she says “I may be limited in what I can do now, but I would like the opportunity to be asked.

Even before becoming a double amputee, Sarah was no stranger to the amputee community. Her son, who is now 21, was born with femoral-facial deficiency syndrome, which meant the bones on his femur and face didn’t grow as fast as the rest of his body. When he was five years old, he had his left leg amputated.

“My son now plays sledge hockey, and he’s on Team Canada’s para-ice hockey development team,” Sarah says. “I didn’t become an amputee until I was 50, but the years I spent as a mother within the amputee community helped me with my own transition.”

Sarah has faced challenges in her “new normal,” but tries to lead by example when tackling issues like ableism and accessibility, telling her students not to judge a person by what you think they can do, but to ask them.

“People look at me and automatically assume I can’t do something,” she says “I may be limited in what I can do now, but I would like the opportunity to be asked.

“I am quite useful, thank you!”

Stay up to date on what’s happening at West Park by visiting our Latest News page.