BACK TO ACTIVE LIFE

For Therese Estacion, coaching the West Park team in the Tournament of Stars celebrity basketball event was an important milestone in her journey back after a devastating illness cost her both legs and some of her fingers.

Therese fell ill while traveling in B.C., contracting a rare bacterial infection that landed her in a seven-day coma fighting for her life. She survived, but the medication that doctors gave her to save her life caused necrosis in her extremities. Despite hoping that the necrotic tissues would heal with time, it became more and more apparent that amputations were necessary. 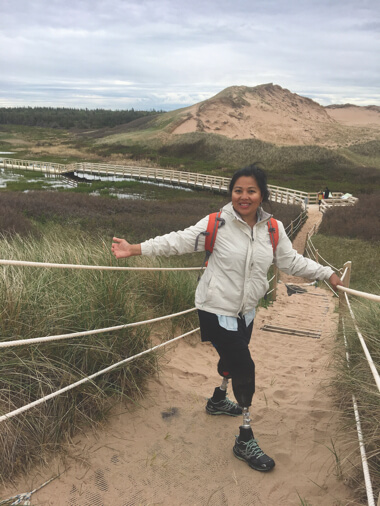 Looking for the best care possible, Therese came to West Park in October 2016 to work with the hospital’s amputee rehabilitation program. She spent a total of four months at West Park, during which she returned to acute care twice, first to have her legs amputated below the knee and then later to have parts of her hands amputated.

"The camaraderie really kept me going," says Therese. "I had no confidence. I'm so different now that I didn't know how people would react to me, but I felt that I was with friends. I felt I could belong."

Therese credits West Park with providing her with a complete rehabilitation – body, mind and spirit.

“The camaraderie really kept me going,” says Therese. “I had no confidence. I’m so different now that I didn’t know how people would react to me, but I felt that I was with friends. I felt I could belong.”

Therese says that the spiritual help she received played a huge part in her healing process. “It helped me grieve the things I can’t do again, but it also helped me find my centre and remember who I am.”

She also says that recreation therapy at West Park is “awesome.”

“Pub night, bingo night, coffee night – it’s what happens after most people have gone home. I invited my friends to go to these things with me. I felt I was entertaining, and not just having people visit to talk about my amputations.”

She is planning to resume her teaching career, moving from grade six teacher to guidance counselor, but in the meantime, is busy traveling, working on a poetry manuscript and advocating for greater accessibility for people with disabilities.