In September 2013, machinist Patrick Doyle was crushed by a 10-tonne piece of equipment. He wasn’t expected to make it through the first night after the accident. When he did, doctors gave him 10 days. When he passed that milestone, they stopped making predictions.

That was probably wise: Doyle has a habit of beating predictions. He was in a coma for three weeks and woke up to find his right leg had been amputated. He was in hospital for eight months. Yet in November 2016, he completed the New York City Marathon.

"But when I got to West Park, they told me I could do a lot more than just survive."

Therese credits West Park with providing her with a complete rehabilitation – body, mind and spirit. 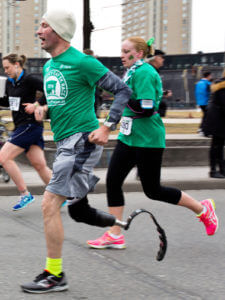 Doyle says he got his life back because of West Park. “I understood at the beginning that I’d had an accident and that was it,” he says.

“But when I got to West Park, they told me I could do a lot more than just survive.”

Doyle received help with cognitive issues caused by the brain injury he sustained, and learned to live with his prosthesis. When he mentioned he’d like to run again, a therapist arranged for him to get a running leg.

“If I hadn’t gotten to West Park, I don’t know where I’d be today,” he says. “Probably sitting in the house doing nothing. Because of West Park, I’m getting back to where I want to be.”